Walkability — “a measure of how friendly an area is to walking.” (Wikipedia – who else?) 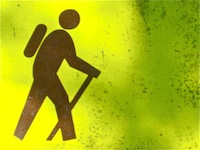 Tonight I was standing along Waialae Avenue in Kaimuki for my neighborhood’s annual Christmas parade. I really love events like this because it reminds us that a lot happens at the local community level. There’s so much diversity within neighborhoods in Honolulu and other towns in Hawaii that it’s important to get out once in a while, meet the neighbors, see what new stores have opened, etc. But there’s one thing I’ve always wondered a bit about Kaimuki, and it usually comes to mind when I’m sitting in Big City Diner having a poached salmon and eggs breakfast (so good) and people-watching out the front windows (guilty). For every decent store or restaurant, there’s an empty office building. For every block that would promote people walking about, there’s a hard end at a gas station or other type establishment that kind of tells the brain: “Nothing more to see here. End of the line. Time to turn around.” I’m probably exaggerating, but Waialae Avenue seems to lack some continuity with regard to “walkability“. It feels “chunked up” to me. Is this a result of the economy? Zoning and planning? Lack of business development incentives? Or do I have it wrong altogether?

Imagine block after block of actually active stores, shops, etc. with people walking up and down the length of Waialae instead of just the same two or three blocks or so. I know, easier said than done, and I don’t have a plan of action. I’m just wishing. But standing there tonight on the street with all my neighbors made me think about the concept of “walkability” again. I think it’s so key to the vitality of an area, especially in a locale like Hawaii where the weather is pleasant year round.

It might sound simple — almost childish — to insinuate that promoting people walking around an area (versus driving to a predetermined restaurant and then leaving) could do wonders for revitalization, but I really think it’s true. It goes a long way in creating a true community and that, in turn, creates business which feeds the positive feedback cycle, reciprocal relationship or whatever you wish to call it. And where a vibrant business area grows, housing grows along with it. There are already fantastic establishments here and boatloads of potential – what can we do to see it to fruition?

Better sidewalks, getting more businesses in the empty spaces, etc. Regarding Kaimuki, I truly think continuity is a key — give people a reason to walk four more blocks down the street instead of just circling the same two blocks on the Koko Head Ave side. But this is certainly not restricted to my neighborhood — I’m not picking on Kaimuki, because I LOVE this area (can’t argue with the Movie Museum and Himalayan Kitchen). It’s just what I know best. Every neighborhood is, to some degree, “walkable” or “unwalkable”, in Hawaii and across America.

What about your community? Does it feature long stretches of stores and general commerce that promote people walking up and down the streets? Or do people drive in, do their shopping and whatnot, and turn around to go home? Does it have sidewalks that encourage an evening stroll? Storefronts close to the sidewalk or set far back behind parking lots? How does this impact your sense of community and what would you change if you had the power to do so? How important is walkability to you when shopping for a new home?

Be Heard Here – Voice Your Opinion Below!