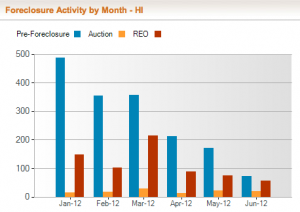 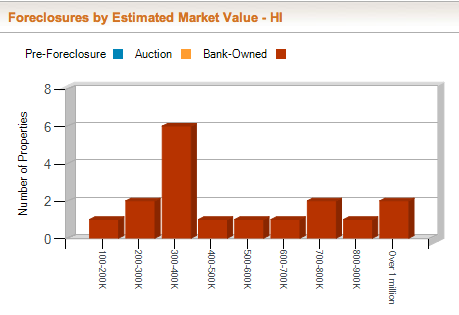 So I just had a quick glance at this brief report on real estate in Hawaii. It basically states that the average median price on sold houses and condos on Oahu climbed from July to August. The jump for SFH (single family homes) was over $40K — that’s quite an increase. Of course, it follows that someone is quoted in the article as saying that the increase in median price is a sign of a strengthening market.

I think it’s extremely premature to come to that conclusion. Anyone who has a basic understanding of statistics can tell you that a one-month spike of over $40K can at least partly, if not largely, be attributed to the decrease in the number of homes sold (each home sold then contributes a larger percentage to the change). Maybe a few more higher-end / luxury homes sold that month than normal which account for the climb by skewing the numbers. I know for certain that a few expensive homes sold in Hawaii Kai – that would most definitely bring up the average. Further inquiry would need to be done before coming to a clear conclusion. Forty thousand in one month seems to be more of an anomaly to me than a sign of a rebounding market.

I may be more conservative than other folks, but I believe in looking at the bigger picture. The real estate market on Oahu may indeed be somewhat of a different landscape from that of the mainland, but we are in the same “system” nonetheless. We still have problems with our economy and unemployment. We have countless foreclosures and short sales happening this very minute, despite some of the lowest interest rates in history. People ought to be flooding into the market, yet they’re not.

So while the news coming out of this article may still be considered positive by some, I’m going to temper my enthusiasm for the time being until a few more of these come across my desk. I’d advise you to do the same.

I just read this article from MSNBC this morning. I found it a very interesting read, discussing how the housing preferences in America have changed over the past ten years. I think it says a lot about who we are as a society and what we value. What are your thoughts? Do you find all the changes to be positive trends? Has Hawaii followed suit or do we stand out from the crowd?

What do you think the report ten years from now will say??