The one year anniversary isn’t too far off when last year’s moratorium on non-judicial foreclosures was enacted. The question I’m starting to hear from agents and other folks in the local Hawaii real estate industry is: Will the foreclosure moratorium be renewed?

Well, I wish my crystal ball held the answer to that but alas all I have is an old Magic 8 ball and it’s not very reliable about anything. But it’s certainly a topic that is going to start getting increasing attention in the next few months.

The initial voices for the moratorium were adamant about stopping the illegal foreclosures in light of the robo-signing and other mortgage impropriety scandals. They also wanted to give homeowners with underwater mortgages a greater opportunity to agree to a loan modification with their lender. Understandable.

However, the cons stated a clogged up inventory of overleveraged mortgages and the ill-advised encouragement of homeowners with bad mortgages to try and salvage their sinking ship. “Just because they CAN stay in the house doesn’t mean they SHOULD” was (and still is) a common sentiment.

No matter which side of the coin you’re on, it’s safe to say that the question of policy renewal is an important one. The most important question to ask is:

Has the moratorium been effective?

That itself is a trick question. How do you define “effective“?

Is it the number of homeowners kept in a mortgage who would others have been foreclosed upon? I might buy that, although some of the mortgage terms are still likely exorbitant. Or is it the % of homeowners previously denied a loan modification that now find themselves with modified terms? That might work as well. The problem is that you can’t measure the outcome until you clearly define your criteria for measurement, and that alone can be very contentious. Generally speaking, the objective would be to determine how the situation has changed since the enactment of the policy and to what degree those changes are a result of the policy or would have happened had it not been in effect at all. There’s no right answer. Hey, that’s what we elect politicians for, right? (insert pun below)

If you’re in the industry or following the housing market closely, you’ll notice that there’s no shortage of new REO properties being released out of inventory. Everyday it seems there are a few new foreclosure properties hitting the market as the banks continue to try and unload some of their stockpile. A renewed moratorium would likely make this drag on a bit further (not that it’s going to end anytime soon) keeping prices (and equity) low, however if it’s preventing people from being kicked out on the streets, well then there’s that argument as well. Again, it’s a contentious issue.

And before people think that stopping all foreclosures is good, remember this is only for non-judicial foreclosures. I’m working with some homeowners on the west side of Oahu right now on a short sale who were recently served judicial foreclosure papers — this is not one big parachute for all.

This post is just food for thought. I’d love to hear from others on whether they’re for or against renewal or even modification of the policy enacted last year. 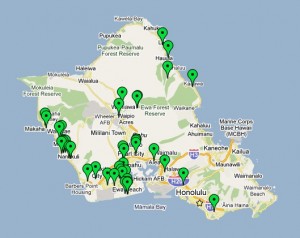